The Case for Forgiveness

I think there are certain things the world needs more of right now: kindness, respect for others, self-dignity, and service to name only a few. But one characteristic that really sticks out to me is forgiveness. I’ve wondered why that is. I think, because, as I’ve experienced life, I’ve had enough encounters with people that on certain occasions I’ve had to decide whether to hold a grudge or forgive someone.

My own experience of extending forgiveness is just a sliver on the tip of a gigantic iceberg. Back in October 2005, the late prophet, Gordon B. Hinckely, said “I think it (forgiveness) may be the greatest virtue on earth, and certainly the most needed. There is so much meanness and abuse, of intolerance or hatred. There is so great a need for repentance and forgiveness.”1 Back in 2005, the world was suffering from the pandemic, if you will, of being unforgiving. The consequences of withholding forgiveness are immense – I’m not just talking about certain siblings missing the family picnic – entire wars have been started over this vice. This issue is so pervasive that even the saintliest among us have to be on the constant lookout for its warning signs. Being unforgiving is the sin of the ages.

Why Is It So Hard to Forgive?

I’ve thought a lot about this question. Why is it so difficult to let something go – to give someone the benefit of the doubt? I think the core of it has do with a sense of injustice. All human beings, whether honorable or not, want to be treated fairly. When this sense of justice is violated, we want to do something to address it – to balance the scales of justice if you will. Many times that takes the form of a punishment – like withholding forgiveness. So we choose not to forgive because it feels like a deserved punishment. The act of extending forgiveness, which is merciful, feels contrary to our desire for justice so we don’t do it.

Let’s get more visual. Being on the receiving end of an unkind act can really sting. It’s as if someone walks up to you and makes you take a bag full of trash, gives you a smirk and walks away. So you are left there by yourself holding all this junk; worse, you are supposed to do something with it. This wasn’t something you asked for. So what do you do? Your first impulse may be to seek out the offender and throw some rotten bananas in his face. Or you may work yourself into a rage and litter every square inch around you with trash. Maybe you’ll do both. You’ve been placed in an unpleasant situation and you have to deal with it. Trying to get rid of this emotional trash may not be easy. 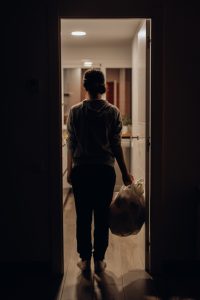 I’d Rather Get Even

I still remember an experience I had in the sixth grade. We were grading the assignments of our fellow classmates. I remember that the paper I was grading had nice handwriting. I then mentioned to my teacher, Mr. Harward, that the paper I had graded had good handwriting but I wasn’t sure who it belonged to. The girl sitting right behind me quipped, “It’s not yours.” The whole class burst into laughter. Mr. Harward, who had a shrewd sense of humor, then looked at me with a twinkle in his eye and said, “Don’t worry Mark, in this class, we get even.”

Revenge can feel so good. It goes back to that idea of injustice. You’ve been wronged and feel the offender deserves punishment. It’s annoying to see an offender get away with something he probably knew was wrong and, yet, did it anyways. Even more irritating, the person may choose to act as if nothing happened. It can drive you mad.

How Can I Get Myself to Forgive?

How does a person find forgiveness when it seems so unnatural, even painful, to attempt it?  How do you learn to “turn the other cheek” and become your brother’s keeper? I don’t have all the answers but I can share some thoughts.

Am I A Perfect Judge?

One question worth considering is, “Am I a perfect judge?” What does that mean? Well, do I know, and understand, everything that has ever happened or ever will happen to this individual? Can I see, and understand, with perfect clarity, into the thoughts, motives, and desires of this person’s heart? If I could actually do these things, I might have a just case for withholding forgiveness. Here is the dagger. I don’t have this ability. Only one person does – Jesus Christ. And He purchased it at an enormous cost – He bled from every pore to obtain it.2 The Lord asserts His right of “choosing to forgive” as well as a commandment for us to forgive each other in a book of scripture known as the Doctrine and Covenants. In D&C 64:10, the Lord asserts, “I, the Lord, will forgive whom I will forgive, but of you it is required to forgive all men.”3 The Lord knows that I’m not capable of being a perfect judge and He asks me to trust Him and forgive others.

Am I Being Fair Withholding Forgiveness?

Something else I like to remember are those times when I wanted God to forgive something I had done or grant me the benefit of the doubt. I felt that my situation was unique and no one could quite understand it. Turning this around, might it seem hypocritical of me to not extend forgiveness towards others or maybe realize that there are some things I may never quite understand about their motives and actions?  Jesus taught a parable on this called “The Parable of the Unforgiving Servant.”4 If I’m honest with myself, I’ll realize that I’ve done things I’m not proud of and have asked, even begged, for God to have mercy. It only seems fair that I would be merciful to those around me.

Thomas B. Marsh was a well-respected leader among the Latter-day Saints back in the 1830’s. Because of his faithful service, God trusted him to hold serious levels of responsibility in a very short time frame – ultimately becoming second in authority to the Prophet, Joseph Smith. But then something really unfortunate happened. Marsh’s wife, Elizabeth, got into a dispute with another lady in town, Lucinda Harris, with whom she had an agreement. The women had agreed to exchange milk from their cows to make cheese. But against the agreement, Elizabeth had apparently held onto the cream strippings – the richer part of the milk – before sending the rest to Lucinda. The matter quickly escalated through different Church authorities all of which agreed that Elizabeth was at fault. Thomas became so bitter about this that it was one of the reasons he left the Church.5

So what’s the lesson? A few things, but what sticks out to me is how Thomas allowed a petty thing, a dispute over cream strippings, to drive him away from his faith. What could have been a small incident became a huge issue when it never had to be that way. Annoying and inconvenient? Yes. But worth losing your faith and values over? No way. But I think many of us fall into this mindset more than we realize. We may choose to hold a grudge over some small thing that really doesn’t deserve the time we give it.

I hope I haven’t come off as “out of touch” with how the real world works or as being insensitive to some of the hardships that people are experiencing. I don’t think that forgiveness is an easy thing nor was it meant to be. Neither am I saying that people won’t have to face justice – God will make sure that both justice and mercy are administered to everyone. But I do think that forgiving others is worth it not only because it heals but because it opens the doors to spiritual growth that otherwise would remain closed. Who wouldn’t want that?