I served a two-year mission for The Church of Jesus Christ of Latter-day Saints from 2001–2003 in Quito, Ecuador. Recently, I was on a Zoom conference call with members from my full-time mission. The main speaker on the call was Lynn Shurtleff, who had led the missionaries in the Quito Mission. I was glad to see our leader after all these years. And he was happy to see us.

Lynn congratulated us for everything we had done since he had left the mission in 2005. But he seemed sober when he acknowledged that some missionaries who had once served faithfully now didn’t want anything to do with the Church. I could sense the hurt in his voice. He then switched topics, but towards the end of his remarks, he asked everyone to reach out to our fellow missionaries who had distanced themselves from the faith and make them feel welcome.

After the call ended, I wondered why so many missionaries had stopped living the message they had once shared in Ecuador. Why did they leave the very church they had sacrificed so much for? Did they think it was a fake, a scam? Was some type of an expectation not met or did someone offend them? I had no idea. All I knew is that each one of them had made a series of decisions that had significantly decreased their ability to feel God’s influence in their lives. But how did they get there in the first place?

A couple years ago, I learned that a friend of mine had decided to leave the Church. He said that he had read the Book of Mormon and had prayed many times but just could not receive a witness that the Church was true. To be sincere, he finally decided to disassociate himself from the faith.

I can’t speak for my friend, but I’ve also read the Book of Mormon and have prayed many times, and from time to time I have had personal witnesses that the message I was trying to live was, in fact, true. These experiences were very real. They weren’t fake. But then what happened? Life was still hard or would get harder and there were certain things about the gospel that I couldn’t understand or that seemed unfair. It’s as if God would let me come up to the well for a few moments and then send me back into the desert. And while, figuratively speaking, most of my life has been spent in different types of deserts, I have remembered my experiences at the well. Those moments have given me the strength to keep moving forward.

Am I just different than my friend? Maybe I’m just suffering from a bad case of the placebo effect? I don’t think so. My personal witnesses were very real. And God is no respecter of persons. Perhaps my friend may have forgotten certain things that he may have experienced along the way. I’m not sure. But I do know that in my own life and in the lives of certain people very close to me, I have seen God manifest Himself in very real ways.

A Different Type of Knowledge

On a couple of occasions, I’ve thought it would be nice if God would appear in the sky every morning and give instructions to all of His children so they would know what to do that day. But that’s not how it works. So, if we aren’t going to see Him, how are we going to have a relationship with Him?

Most of life, we use our reasoning abilities to try and understand the world around us. Science is a great example of this. Think of all the incredible discoveries that have occurred via the scientific method: electricity, the telephone, anesthesia, vaccinations, automobiles, airplanes, the Internet, and my favorite—the kitchen microwave. The ability to think critically about what we experience is foundational to human intelligence and is one of the reasons why we have so many amazing things.

Ironically, as many scientists have delved deeper into scientific discovery, they’ve began to observe other things that seemed impossible to prove using scientific methods. Albert Einstein said: “The harmony of natural law reveals an Intelligence of such superiority that, compared with it, all the systematic thinking and acting of human beings is an utterly insignificant reflection.”1 Einstein couldn’t really prove the existence of a supreme being through scientific methods, but he could sense that there was something more to the whole picture and that science couldn’t explain it.

Certain types of knowledge can’t be acquired through our reasoning abilities. They have to be acquired through other avenues—spiritual avenues. The Apostle Paul had something to say about this. He taught the Corinthians that the only way to know God is through the Spirit of God and “not” the Spirit of Man.2 What does that mean? It means that our ability to understand divine things is limited unless further knowledge is given to us from a higher source. This is called revelation. And how do we experience it? In different ways. Some people would describe it as a feeling of enlightenment. It’s like a light switch goes on in your mind that helps illuminate a certain issue that may have been impossible to figure out before.3 Others might describe it as a sense of peace, comfort, or reassurance that goes beyond comprehension.4 And others have described it as truthful feeling coming into the heart, directing them to do a certain thing.5

Revelation has caveats that may feel difficult. To receive it can require a certain amount of personal worthiness. It usually must be sought after, just like we would seek after any other type of knowledge. And it comes on God’s timetable, not ours. 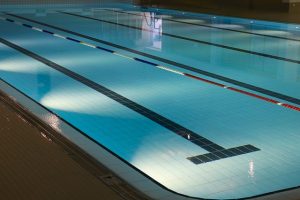 Deep End of the Pool

When I was around eight years old, my parents took me to our local recreation center for swimming lessons. I still remember the distinct smell of chlorine as I viewed the huge pool from the balcony above.

I remember being scared of the deep end of the pool. That’s where your feet didn’t hit the bottom. And it wasn’t until we had gotten good enough with the basic strokes that we could swim in that area. But when I finally started swimming in the deep end, my confidence as a swimmer began to grow. I trusted the basic strokes even more and swimming became more satisfying.

In some ways, learning how to swim parallels living Christ’s teachings in a difficult world. At times, we will find ourselves in the figurative deep end of the pool, or maybe even in the middle of a raging ocean, and we will need to use the basic swimming strokes to keep ourselves from drowning, so to speak. The spiritual doggy-paddle simply won’t do. But as difficult as this might be, it’s helpful to remember that life’s deepest waters also have its best treasures. You don’t discover life’s coral reefs, great blue whales, or mid-ocean ridges by staying in shallow waters. In fact, God wants us to go well beyond the basic strokes. He wants us to become expert scuba divers exploring the great deep, experiencing unbelievable things.

If a person visited a garden center to purchase a seed that would grow into an apple tree and was told that the seed would grow into a fruit-bearing tree in one month, would you believe it? How about one year? Two years, maybe? Try 7–10 years, assuming that it has been cared for properly.6 Good, worthwhile things simply take time. This same mindset needs to be used in our approach to the gospel. Real spiritual growth and its blessings will take time and proper care to come to fruition. If we find ourselves wanting to quit on our spiritual journey, we need to pay Johnny a visit. He could teach us more than just growing apples.